Check out my article in the September “Diablo Gazette” P. 14 about our own Jill Hedgecock. 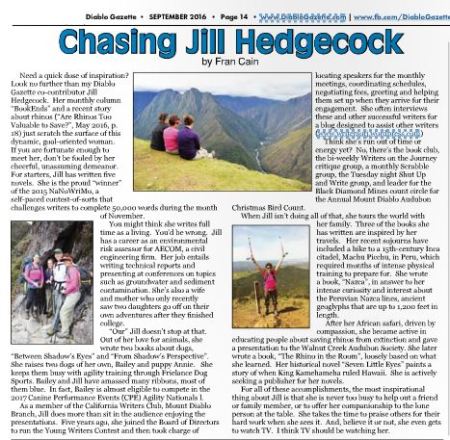 The Reality of Writing

I just attended the monthly meeting of the California Writer’s Club, Mount Diablo Branch. Tamim Ansary spoke about why we write. I’ve been writing ever since I learned how. Short autobiographies from 3rd grade, papers for school (I returned to college in my 20’s and again in my 40’s just so I could write), letters, reports, stories, articles. I even wrote a book.

Thinking while writing is a lubricant for the mind. And the best part is the “limitless-ness” of writing. It provides a perfect route for self-expression, whether that’s opinion, imagination, historical, etc. It’s free and it can be done any time of the day or night. All it takes is a little time. Tamim writes six hours per day. That’s a high bar for me. I’m happy if I write for an hour or two.

Now that I’ve finished a book, I find I haven’t finished it at all. The initial creation is done, but now I’m in the editing phase. Then there’s the rewrite and re-edit. That’s the reality of writing…for those who want to write for money. I write for the love of it. Even when I write in my journal, it makes me feel like I accomplished something. I also enjoy the company of other writers, and have become close comrades with my Writers on the Journey.

I write because it enriches my life in a quiet way. For me, that’s the reality of writing.

A nice woman from North Carolina sat next to me on a plane from San Francisco to Atlanta last week. After an hour or so of occasional small talk (newborn grand baby in Hawaii, daughter married to marine), she ventured to ask me what I thought of the politics out there in California. I rarely discuss politics, and never with strangers. But we were sitting inches apart so I had to come up with something. I said there will always be politics, and I mostly ignore it. California is beautiful, the people are nice, and the weather is great.  I love living there.  There’s something for everyone, and I can’t say anything bad about it.  And politics is mostly just noise. That expression seemed to surprise her but but she accepted it, with a shake of the head and a comment about it being crazy. Couldn’t really disagree with that.

And how is the real estate market in San Francisco?  I explained about the tech firms expanding and the cost of housing and rentals going up. Then I showed her the graphs in Time Magazine I had just finished looking at. Every state was shown indicating the severity and breadth of their taxes — corporate, individual, sales, property.  Of course, California was all red, indicating high on every line except property tax. While North Carolina was high on everything except corporate tax. I pulled it out to show her.

And what’s the latest exercise craze?  Well, running and biking are very big. Then there’s a new studio to vibrate the fat off. Oh, and there’s a new pole dancing studio by my office.

She stopped asking questions after that.

Yep, something for everyone in California. Land of the free. Home of the brave.

When the Wall Street Journal publishes an article about erotica, I pay attention. I learned the term “romantica” which is romance or erotica but with happily ever after, or HEA. Who knew? I read a lot of romance in high school, even sharing books with my sister and my mom. The Angelique series was my all time favorite. Perusing the website http://www.smexybooks.com, referenced in the article, proved that romance and erotica is big. It is helped by e-readers that make it easy to conceal the books, thereby enabling women to carry and read romance novels wherever they go. This is great news for those of us writing in the genre. I’ve long thought romance has been missing from our lives, and I’m delighted to see it making a comeback.

Laura Hillenbrand has once again created a masterpiece. This amazing book ranks as one of the best books I have ever read. Why? Could it be the way she captured my heart with the descriptions of little Louie Zamperini? He seemed so tough yet so lovable.  Maybe it reminded me of the stories I’d heard from my own mother–who grew up in an Italian-American family with older brothers and cousins in pre-war Connecticut. Could it be the remembrance of the closeness, love and emotion that I grew up with in my traditional family?

The portrayed emotions in the book are full and real:  From the joy, ecstasy, and arrogance that come from winning in sporting contests to the depths of humiliation, desperation and ruin that come from war. We see through Laura’s writing the pain families suffer when loved ones are lost to us. And the struggles of one day believing a son is alive to bearing the burden of being told he is lost at sea, dead…but never knowing for sure.

We experience through the accounts of survivors the brutality of living as a POW in WWII Japan. Some of it would be incomprehensible and hard to believe were it not for the painstaking bibliography and immaculate citations of this fine author who left no stone unturned to assure accuracy.

In the descriptions of family life, including the pot of sauce on the stove being prepared by a devoted Italian mamma, I adopted this family into my heart.  I experienced a lifetime in 398 pages.  I lived and breathed the book for the week it took me, morning noon and night, fitting in a page or paragraph at every break in the work day. And when it ended, I flipped right back to the beginning.

I now know Louie Zamperini, his family, and his beautiful and courageous wife who refused to let him go down in despair, and thus saved his life yet one more time.  I loved his friends and fellow POW’s, and I hated his tormentors.

Connecticut is spectacular in May. Nature bursts forth  in an explosion of color in high contrast to dormant color-less winter.  As spring arrives, hills blanketed in trees turn vibrant green in a matter of days, right before your eyes. The bright blue sky, interrupted by billowing clouds, sparkles.   Mounds of flowering white dogwoods displace the mounds of cold white snow, almost impossible to imagine now.  Plum and cherry trees and forsythia bushes erupt in fresh pinks, reds and yellows.  Gardens team with tulips and lilies in every hue.

Connecticut weather is oh so benign in May, so mild.  People emerge with caution from the experience of winter. They shake off the shock of it, and still a little  stunned, realize that it is finally over; it is safe to walk outside now.  This year they speak of it with new terms never heard here before, “ice dams”and “roof rakes”.  The talk recounts the storms of 2011:  the mountains of snow,  the cycle of melting and freezing that created thick, heavy layers of ice–ice that crushed barns and buckled buildings like tin cans, trapping and sometimes killing the inhabitants, horses and livestock.  There are descriptions of enormous hanging ice-cycles.  Then the floods when ice dams formed on roofs, trapping melting water and forcing it inside homes, impossible to stop; and the roads and bridges that disappeared under torrents of water when melting began in earnest.

Connecticut in May is wonderfully alive.  The sight of baby squirrels and chipmunks flitting everywhere, and the chirping of birds busy building nests  belie the worst winter in recent memory.  Residents here braved the storms with little fanfare or recognition for the effort required to persevere.  Just heads down work day after day plowing roads, shoveling paths and picking at ice like chain gangs in a white, high-walled prison.  When the snow melted, the plowing switched to bailing water, with no questions asked, in a simple matter of survival.

Connecticut in May is bright with promise.  Like new parents, the agony of the process of winter is forgotten by the citizens as their blossoming world makes demands. Gardens need prepping and planting. It needs to be done right now because a few weeks delayed might mean missing the best of the growing season.  Mangled useless gutters need replacements.   Leaking roofs marred by ice and rakes need repairs. Trees broken by the weight of ice or pushed over by well-meaning plowers need clearing.  Everyone is hard at it.  People of Connecticut are hardy and strong.  They take no rest, nor is any desired. They know with certainty summer will come soon, and it is worth working and waiting for.

Connecticut in May is the breath of spring to be taken in deeply.   The cycle will repeat, perhaps less viciously.  The rain will come, maybe tomorrow.  But for now, people savor every luscious moment and store it in memory to be used as protective insulation against the next killing winter.  It is a life-saving gift. Or maybe it is the just reward for a job well done by a devoted loyal populous.  In either case, thank God for May.

I once watched an episode of Sex and the City. Someone bumped Carrie Bradshaw on the bustling crowded street in Manhattan, almost knocking her down. “You’re so busy” she said, in exasperation. I feel that same sentiment every day.

Everyone I know is so busy. Our lives are chock full of…what? Working to make ends meet, of course. But in addition, my friends with children hurry from breakfast or dinner to schlep kids to school or a [fill-in-the-blank] match. My empty nest friends hurry from coffee to shopping to hair to doctor appointments, or even cocktails in the latest “cougar” bar. There are luncheons, dinners, business meetings, volunteer days. When at home, we are all busy watching TV or sitting in front of the computer or iPad. There’s shopping, reading, writing, or surfing. Don’t forget Facebook and Twitter. We seem to have filled every moment in the day.

A year or so ago, I found myself with a gap when my husband took the swing shift. Suddenly I stopped being busy in the evenings. It came as a shock. I didn’t know what to do with myself. I tried insinuating myself into the lives of some friends, but they were already busy with other things, leaving me left out and alone. “You’re so busy.” After a few weeks though, I filled my time until I could again say “I’m so busy”.

It’s as if we are on a frantic whirlwind of activity, and when we aren’t, we feel out of sorts, anxious and craving to be busy. Either way there are complaints. Our glass is either too empty or too full. When is it just right? What happened to quiet time? Sunday naps and family dinners? Along those lines, I’ve promised myself I’m going to meditate every day. Just as soon as I’m not so busy.

Do you find yourself too busy? Not busy enough? Or is your glass just right?

Writers on the Journey Blog
Blog at WordPress.com.